There are certain things you need to take care of to make your foreign trip memorable. People often make a check-list of items for the planning but often ignore the live translation app with camera. if you are planning for an abroad trip, then this is a must to have app on your list to make the trip even memorable. 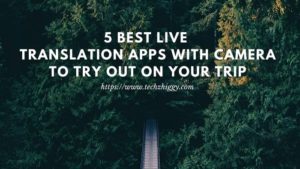 Most of Android or iOS applications available on the play store for language translation are pretty bad. So we tried out most of the apps and come up with this Top 5 Live Camera Translation Apps. So without much ado, let us introduce the list with each one’s pros and cons. Try out these any of this app and make your trip even more memorable.

Google spends millions of dollars on the R&D and came up with this awesome live translation app called Google Lens. This is one of the accurate and widely used apps worldwide. It uses Machine learning algorithms with visual analysis to make this app even more powerful. not only for translation, but there are also many other things this app can do.

Just point your camera at any object, it will attempt to read bar codes, text, QR codes, and relevant search results. Google Lens app is integrated with Google Photos and Google assistant apps for easy access.

We can search for what we see using the Google lens app. This is the best translate picture app available on the internet and one-stop for all your translation needs. It’s available in all the major languages.

Other best features of this app include:

Translate text, voice, live camera and screenshots with Microsoft translator app. All you have to do is to take a picture of the text and then tap on the translate option available on the app. It will display the translated text on the screen. You can even download the languages for offline translation and use it when you are traveling.

We can build a conversation with the split-screen option where you can see the translated text from the speech. One of the main drawbacks of this app is it can’t translate the text on the fly.

Another prominent solution to all our language translation problems is Dear translate (previously known as Youdao Translate). It allows us to translate in over 100+ languages and very helpful for your trips. This app supports 3 modes of translation.

The translation ball, which comes with this app, is helpful to translate the text from within other apps. You don’t need to copy the text and paste in the camera translation apps.

Another best feature of this camera translator app is, you can directly upload the pdf document and it will automatically convert the text to the target language.

One of the main drawbacks of this app is, it doesn’t support offline camera translation feature. We need to have an active internet connection to function this app properly.

With advanced OCR technology, Camera Translator – Recognise and Translate Pics app accurately recognizes the objects pointing to your camera and translates to your selected language. You don’t need to specify the input language for this app. It automatically detects and shows the translated version of that particular text. We can even use the photos from our phone gallery for the translation.

You can select the object mode in-camera translate app and point the camera towards any object that will help you to identify and read-out that for you.

In earlier days, people used to hire a guide to translate the language. But now, your phone is your guide. We have the technology to rescue. A phone with the translation app is enough to explore things. All we need is a cool and best translation app.

We have gone through most of the popular translation apps available on the play store and came up with this Top 5 list of Best apps to translate text and camera pictures. If you have tried any other apps, do let us know your feedback on the comment box below.